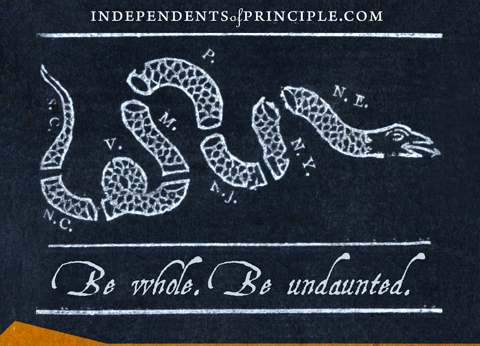 During the American revolutionary period, Benjamin Franklin published this cartoon —we’ve updated the coloring and the text— with the caption “Join, or Die!” His meaning was that the new states would need to join together into a unified overarching political structure, or they would be easily overrun by the British empire. In Lincoln’s words, “a house divided against itself, cannot stand.”

The famed Gadsden flag, with the yellow background and the coiled snake, reading “Don’t tread on me” was in part an elaboration on this theme. Franklin’s meaning was clearly that the colonies, and their democratic revolution, were a primitive, instinctual being, working from the core aspirations of nature, but with the power to bite back against a powerful empire.

The Gadsden flag made the snake more specific —a rattlesnake— and warned that any attempt to treat upon the rights of the free people of North America would result in an unpleasant and venomous reprimand. The idea was: there is a fight to be had, if we feel our liberties being trampled upon. The metaphor ably captured one of the key sentiments of the Revolution: the British authorities had ruled mightily over the lives and the rights of the colonists, and the purpose of the Revolution was to put an end to such abuses.

The symbol has been retaken in postmodern America, by militia groups, advocates for unfettered gun rights under the Second Amendment, and most recently, the Tea Party. The trouble now, however, is that the flag is most often used to warn against tyranny from within, and the supposed forms of tyranny are often little more than “the other party”.

For Benjamin Franklin, Thomas Jefferson and George Washington, political parties were not necessarily considered a solution to the problem of how to build a democracy; they were seen with deep suspicion, because partisan interest would mean interest not in line with the better condition of all the citizens, of the republic itself or of the nation’s foundational democratic ideals.

Washington resisted being brought into any one faction, and resisted the accumulation of power in any one branch of government. Jefferson believed the ideal public servant would be one called to action by the need for principled servants of the public good, who would then retire before spending too long in the glare and temptation of the public eye.

Benjamin Franklin saw the political makeup of the new states as needing to be oriented toward two main goals: unity, in furtherance of the security of all against foreign aggressors, and a shared commitment to the principle that in this democratic republic, only the law is king, and the officials elected to govern do so only at the consent of the governed.

His “Join, or Die!” cartoon was intended to encapsulate in one resonant and efficient image the principle that a free people remains free by sharing in that freedom and by honoring each other’s place in that free society. For our purposes, in the 21st century, the idea that we are vulnerable to the erosion of our liberties is vitally important, but we cannot allow partisan radicalism to cloud our view about where the threats lie or to whom we should be crying out: “Don’t tread on me!”

Joseph is Citizens' Climate International Director. He is the lead strategist supporting the Acceleration Dialogues (diplomatic climate-solutions roundtables) and Resilience Intel—an effort to move the world to 100% climate-smart finance. Joseph represents CCL in the Carbon Pricing Leadership Coalition, the UNFCCC negotiations, and other UN processes, and is founder of Geoversiv. His articles appear from time to time in the Guardian. He served as Interim Director for the Food System Economics Commission from April through November 2020, and is a senior advisor to EAT for sustainable finance. He is a lead contributor to the Earth Intelligence podcast.

Respond to United, to Earn a Democratic Future