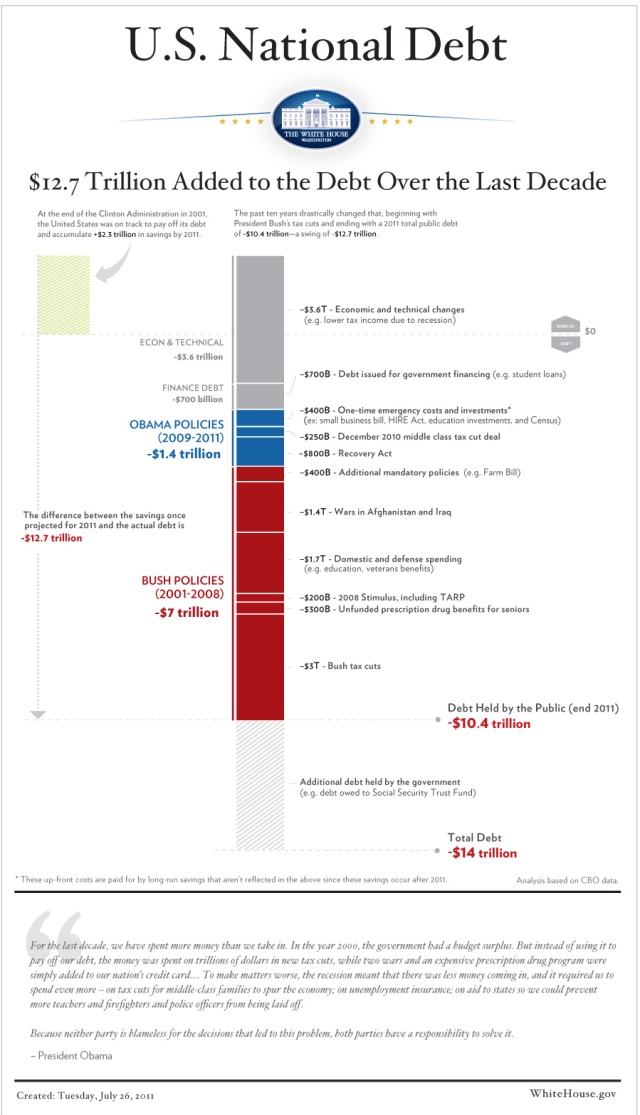 The composition of the national debt is a complex history of policy decisions, governmental priorities and Congressional authorizations. Republican opponents of Pres. Obama have suggested that debt and deficits have “exploded” since he took office. They have sought to paint the president as a “tax and spend liberal”, because that accusation fits their standard campaign model.

But economists and budget analysts, including a top budget aide to Republican presidents Reagan and Bush, the elder, say Obama’s actual performance as president puts his budget policy in the “moderate conservative” segment of the fiscal policy spectrum. He has routinely demanded from Congress that major legislation be “paid for” or “deficit neutral”, and he has struggled mightily—putting aside his own policy priorities—to slow the expansion of deficits that stems from policies enacted by the previous administration.

Among these major policy drivers are the wars in Iraq and Afghanistan. The Bush administration simply never included either war in official budget projections, requiring Congress to fund both through “supplemental” spending agreements. The result was that two massive unfunded wars, each adding trillions to government spending, over a decade, were kept “off the books”.

Barack Obama—who voted to oppose raising the debt ceiling when he was a senator, in part because he believed the “off the books” accounting was going to bankrupt the government and pose a threat to the nation’s long term health and prosperity—viewed this as unethical and pledged to put the wars on the books, so the public, and the Congress, could more directly judge the costs and benefits of the wars and plan for the long term.

What is vitally important for all independent voters to understand is that while the debt debate has been laced-through with intense partisan rhetoric and vitriolic attacks, is that there are real drivers of the national debt, and they have little to do with socialism. The national debt is a product of patterns of borrowing that have soared over the last three decades, largely from one particular problem: the coincidence of relentless tax cutting with the need to fund existing programs and address real-world challenges. 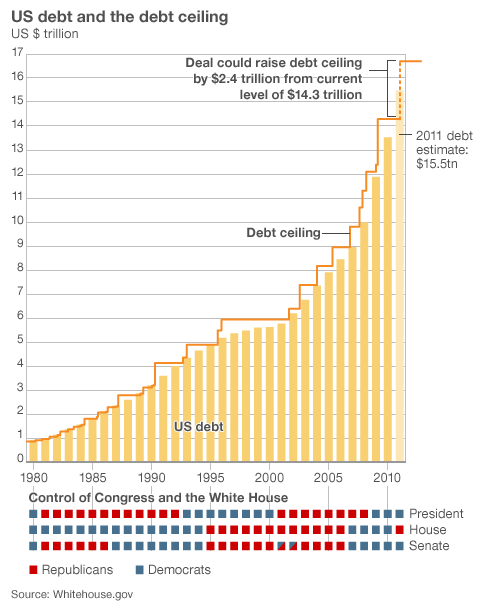 The first Pres. Bush was a better debt manager than his immediate predecessor or his son; debt grew by roughly $1.4 trillion, during his 4 years in office. Pres. Clinton did a little better, adding about the same amount over 8 years. But Clinton achieved an important result: he left the government with projected budget surpluses exceeding the total national debt, over the coming decade.

Pres. George W. Bush took office in 2001 with those surpluses in place. His 2001 tax cut, however, reversed the entire surplus, and by the time of his reelection in 2004, he added to the (once again) growing debt another $1.7 trillion. By the time he left office in 2009, the national debt had escalated to over $10 trillion, and the debt ceiling was already primed for another $2 trillion in borrowing.

That extra $2 trillion in borrowing was necessary, to pay for spending already “in the pipeline”, already passed into law and on the federal books, either as part of the official budget or supplemental spending. By the end of 2009, with George W. Bush’s last annual budget playing out, the national debt was at $12 trillion. It would be mid 2010, before the active federal budget was “owned” by Obama.

As of this writing, the policies of George W. Bush have added fully $7 trillion to the national debt. Since then, Pres. Obama’s policies have added another $1.4 trillion, and already planned spending policy, historically low government tax revenues and the economic reality of tight credit, slow growth and lagging job creation, makes it very difficult for him for him to cut spending to a level where he would be able to match Pres. Bush, the elder and Pres. Clinton, in managing the national debt.

His record on budgets has been one of reformer: he has consistently favored institutional reforms that impose real cuts, and bend cost growth down to match or fall below inflation. But reducing spending can reduce national economic growth as well, further straining the national debt trend lines.

What Pres. George H.W. Bush and Pres. Clinton were able to manage was a cooperative Congressional environment, in which tough bargains were made with rivals in Congress. Pres. Obama has not had that luxury, and it may be he will not have it. There are growing tensions in the Republican party, resulting from real disagreement about whether budget and debt should be used for partisan strategy or whether they should be non-partisan policy items, with all voting in favor of the national interest.

There is opportunity in the budget policy negotiations, but the opportunity will be missed, if one or both sides refuse to use the negotiations to reach a constructive, well-designed, well-funded, rational policy on national community reinvestment, infrastructure upgrades, education and new revenues capable of meeting our needs and our aims.

Joseph is Executive Director of Citizens' Climate International. He represents Citizens’ Climate in the Carbon Pricing Leadership Coalition, the UNFCCC negotiations, and other UN processes. He is the lead strategist supporting the Acceleration Dialogues (diplomatic climate-solutions roundtables) and Resilience Intel—an effort to move the world to 100% climate-smart finance. He is Senior Advisor Sustainable Finance for the EAT Foundation, where he served as Interim Director for the Food System Economics Commission, during its start-up phase from April through November 2020, and now serves on the Secretariat of the Good Food Finance Network. He is founder of Geoversiv and a lead contributor to the Earth Intelligence podcast. He publishes a free newsletter at LivingFutures.net

6 responses to The Drivers of National Debt